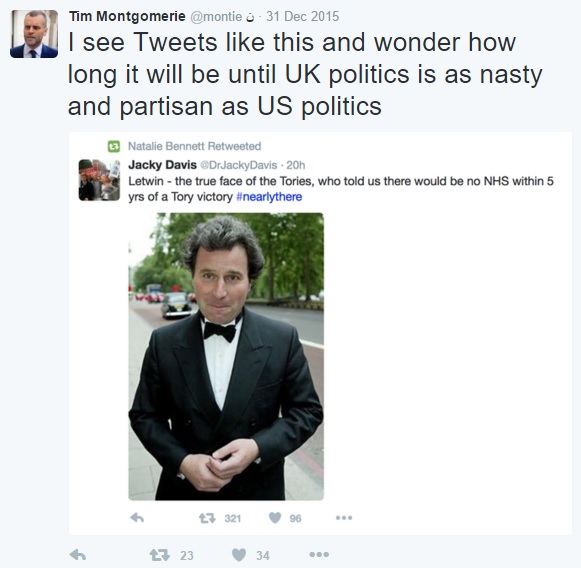 I see tweets like the ones above and wonder if I live on the same planet as Tim Montgomerie. (Tory Party activist, blogger, columnist, co-founder of the Centre for Social Justice and Conservative Christian Fellowship and creator of the ConservativeHome website)

I share Tim’s concern that UK politics is well on the way to becoming as partisan and nasty as it is in the US. However it beggars belief that he should single out, as an example, the rather mild treatment received by Oliver Letwin at just the moment Lynton Crosby, the arch exponent of the ‘dark arts’, has been given a knighthood for services to the Tory Party.

All parties are guilty of misdemeanours but the reality is incontrovertible – it is the Tory party spin machine and its media supporters that are masters at cynically and ruthlessly exploiting every dirty trick in the book in their fight to gain or retain power.

It also appears that the remaining two obstacles preventing our politics becoming as dysfunctional as in the US are about to be dismantled.

We are being prepared for the destruction of public broadcasting in this country. And with the cosy relationships between the cabinet and Rupert Murdoch fully repaired it must be just a matter of time before Murdoch is allowed to grab a monopoly position in British media and introduce Fox style news and commentators. This would have happened back in 2011, facilitated by Jeremy Hunt, if the News of the World hacking of Milly Dowler’s phone had not been exposed.

Now that the farce of Levenson and Cameron’s phony promises are on the scrap heap Murdoch is free to resume where he left off.

If Tim Montgomerie really is worried about the americanisation of British politics, he needs to address his owns party’s tactics and its relationship with the right-wing press and big business lobby groups, well before worrying about the very mild treatment of Oliver Letwin.

Note: It is a matter of fact that Oliver Letwin was guilty of making what, even for the 1980s, was a racist statement and has subsequently been in a position to allow that sentiment to influence Tory policy. He is also on record, as are others in the cabinet, for being in favour of the privatisation of the NHS.  It is therefore difficult to see that the tweet Tim mentions is particularly controversial when compared to the treatment regularly dished out by the Tory spin machine, supported by the Tory press, at anyone who gets in their way.

Here’s Tim promoting a Sun headline (not a word of criticism here): 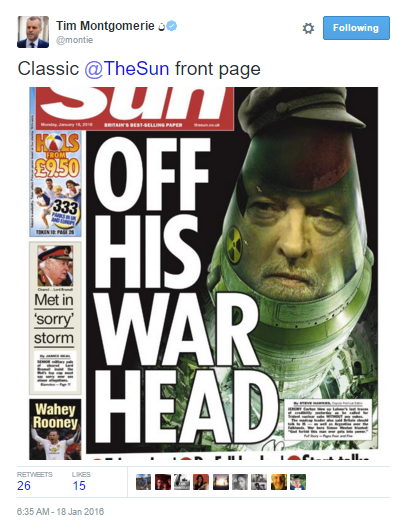 The 5 most shocking quotes in Oliver Letwin’s ‘racist’ memo: http://www.independent.co.uk/news/uk/politics/the-5-most-shocking-quotes-in-oliver-letwins-racist-memo-a6790551.html