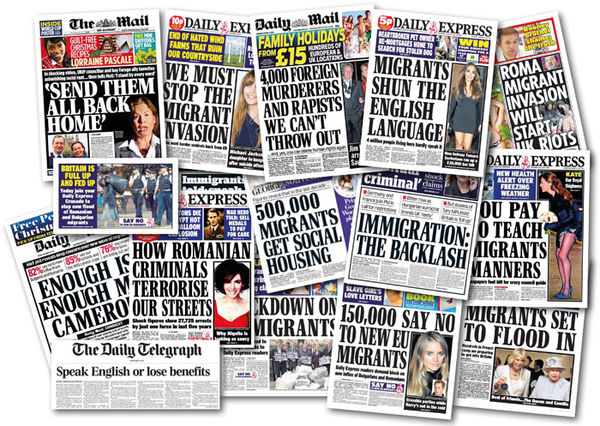 The reality of course is that no one is saying that discussion or concern about immigration or its consequences is intrinsically racist.  The reality is that the accusations of racism and xenophobia are aimed at the government’s rhetoric of lies, disinformation, smear and innuendo and the disproportionate focus on policies that play well to the right wing tabloid press but don’t actually serve any useful purpose.

In response to the government’s fear of losing votes to UKIP and pressure from its own right-wingers it has followed the UKIP agenda on immigration. However you cannot out ukip UKIP. Instead the Tories have found themselves in a no win situation – they have made promises on immigration that they cannot fulfil but at the same time have been stirring up xenophobia that is playing right into the hands of UKIP.

Our country seriously needs a grown up debate about immigration based on facts, evidence and reason.  In particular it needs to take account of those who have been adversely affected and have justified complaints. But we also need to acknowledge that responsibility for the way immigration has been handled over the last 60 years rests with successive governments. Immigrants themselves are just doing what millions of Brits have done in the past – demonstrated the courage and gumption to get off their back sides and try to make a better life for themselves in a new country.

The big issue that our current government totally ignores is that the undoubted benefit to our economy of immigration has not been shared fairly, particularly by those who have been adversely affected.  If just a small proportion of the economic benefit had been used to make really significant improvements to services, infrastructure and housing etc. in those areas affected we might be in a very different place. Unfortunately our government’s use of the word ‘fairness’ is limited to disingenuous arguments that seek to demonise immigrants as benefit tourists and scroungers, despite all the evidence to the contrary.

In the mean time we are sending out a message to the world that we are no longer open for business. Foreign scientists and engineers, academics in general, students etc., are being turned away and our involvement in international affairs is being damaged or curtailed.  This does not just affect our standing and reputation it also affects our economy.

Finally, I don’t need to remind anyone that smearing, demonising and inciting fear or hatred of minority groups for short term political gain has had a very bad history.

“It isn’t racist to talk about immigration – as long as you talk about it without being racist.”

A rising level of anti-immigrant rhetoric will make life difficult for many: http://www.independent.co.uk/voices/comment/why-we-need-a-movement-to-counter-xenophobia-8887098.html

How politicians and the media made us hate immigrants:
http://www.opendemocracy.net/transformation/chitra-nagarajan/how-politicians-and-media-made-us-hate-immigrants

Rhetoric on immigration ‘is scaring off scientists’:  http://www.thetimes.co.uk/tto/science/article4056110.ece

Recent waves of immigrants to the UK contributed far more in taxes than they received in benefits http://buff.ly/1e095Rc

UPDATE (18th Nov 2014): Five questions for anyone who says “it’s not racist to talk about immigration”: http://www.newstatesman.com/politics/2014/11/five-questions-anyone-who-says-its-not-racist-talk-about-immigration

99% of hedge fund managers give the rest a bad name.