On the night before a likely cabinet reshuffle it might be worth remembering this very strange and rather unpleasant article from the Daily Mail of Nov 2010: Cameron won’t make me a Minister… I’m a white, married, Home Counties Christian, says Tory MP 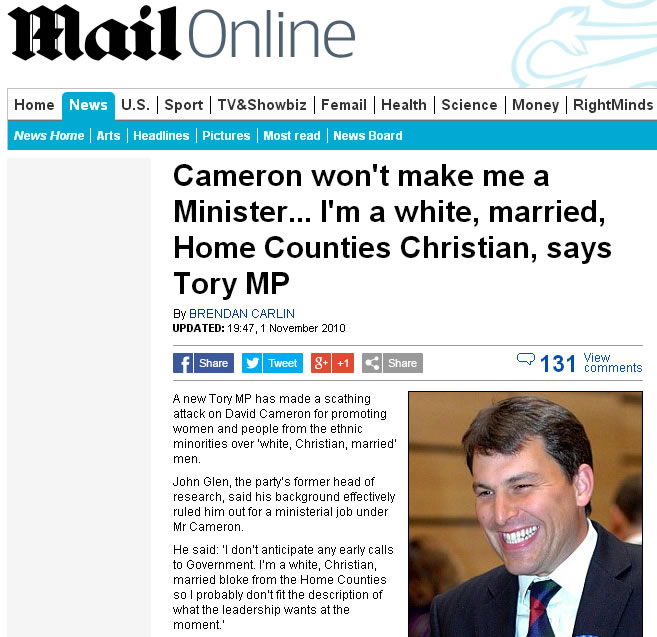 The article claims that John Glen “has made a scathing attack on David Cameron for pro­moting women and people from the ethnic minorities over ‘white, Christian, married’ men” and that he  said “his background effectively ruled him out for a ministerial job under Mr Cameron.”

He said: ‘I don’t anticipate any early calls to Government. I’m a white, Christian, married bloke from the Home Counties so I probably don’t fit the description of what the leadership wants at the moment.’

The Daily Mail in its usual unpleasant  style made the most of this – any excuse to imply that ethnic minorities and women might be getting the upper hand irrespective of the evidence.  But then evidence and facts are generally ignored by the Daily Mail.

The facts of course are that out of 100 government ministers less than 20 are women and only a couple are from ethnic minorities.

In fact of course most ministers are white, male, home counties etc etc.  A disturbingly large number went to Eton & Oxbridge, were born wealthy, have never had a proper job and seem singularly unqualified for their roles, why didn’t John Glen mention that?

I don’t normally recommend a Daily Mail article but I assume that the quotes are correct and it is worth reading just for these.

UPDATE (Tuesday 4th Sept 2012):  as far as I am aware John Glen has not made it into the cabinet or become a junior minister in the reshuffle. However, Cameron’s new cabinet consists of 85% men, 100% white,70% Oxbridge, 100% wealthy and not one lives in the real world.  So Mr Glen, where are all those women and ethnic minorities???

WHY is this important? The headline is designed to reinforce the Daily Mail’s continuing agenda of racism and misogyny. It implies that a male, white, home counties, Christian is somehow at a disadvantage compared to ethnic minorities or women. The article does not offer one shred of evidence to support this. In fact the allegation is clearly ridiculous, particularly given the make up of our current government.  But the majority of Mail readers will not read the article in full, they will just see the headline and confirmation bias will allow them to reinforce their prejudices.  This particular example is too comical to be taken particularly seriously but the insidious effect of unsubstantiated and usually totally false headlines day in day out should not be underestimated.

UPDATE: Just heard (Wed 12th Sept 2012) that John Glen has been made PPS to Eric Pickles, Secretary of State for Communities and Local Government.  Congratulations to John.

This should be interesting to watch as John Glen grapples with the conflict between the interests of his constituents and the doctrinaire policies of Eric Pickles.

UPDATE: (3rd Oct 2012) Seems John failed to have any influence on Eric (Localism) Pickles concerning the Hampton Park II estate which has got the go ahead over the wishes of residents and councillors.
Pickles  1  Localism 0
Hampton Park II to go ahead after review plea fails (Salisbury Journal, 3rd Oct 2012)

UPDATE: 22nd Dec 2012 Here is the latest photo of the Cabinet, taken to commemorate the visit of the Queen.    Yes, David Cameron has certainly been “promoting women and people from the ethnic minorities over ‘white, Christian, married’ men” here’s the evidence: 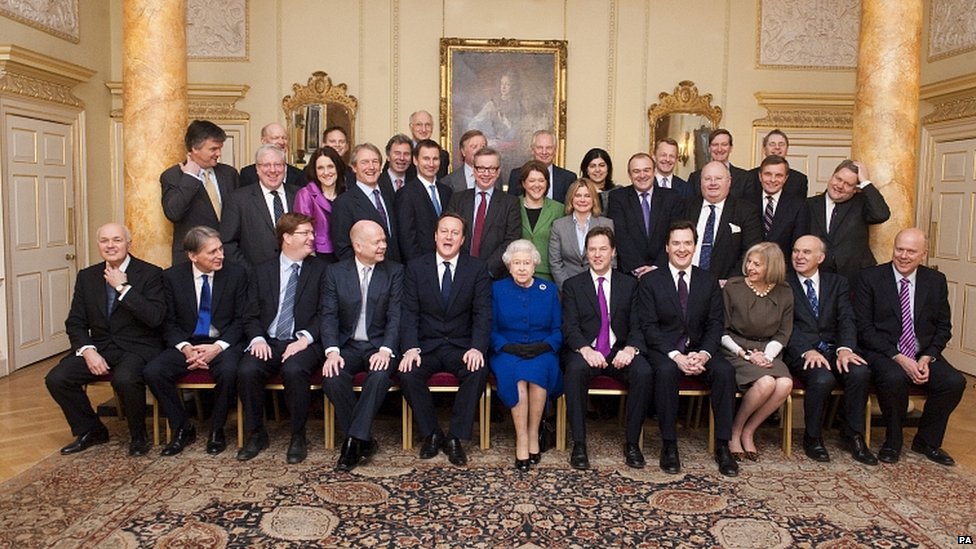 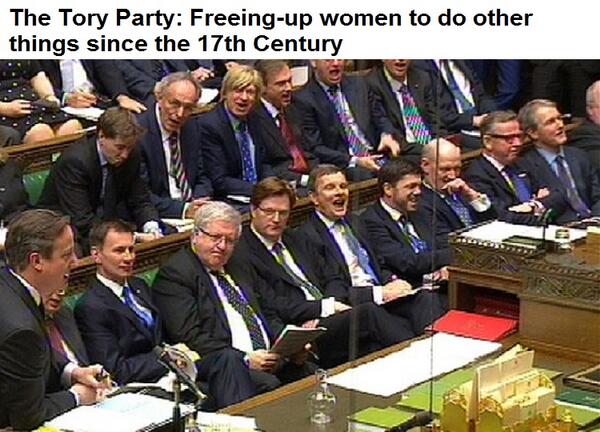 UPDATE 28th Sept 2014: Have just noticed that John Glen has been promoted to the Number 10 Policy Board (Home Affairs and Constitution) to work on the constitution and devolution.   So perhaps being a white, home counties, Oxford educated, Christian wasn’t such a dreadful disadvantage after all. Well done John!

UPDATE Feb 2017. Just thought I would add a photo of the current cabinet. I guess Mr Glen can feel disgruntled about the small increase in the number of women in the cabinet at his expense but other wise it looks like the same old mix of white, home counties, privately, educated men: 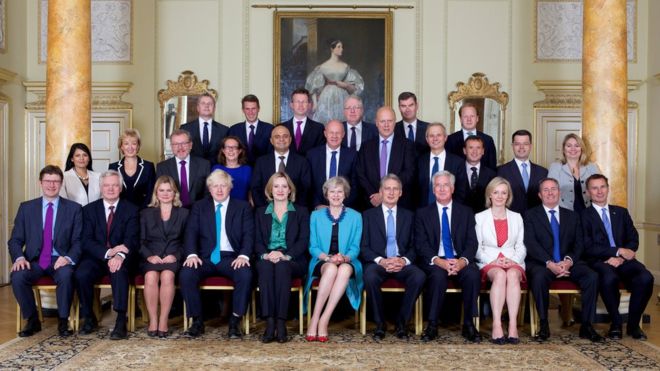 UPDATE: June 2017 John Glen MP has finally made it – he has been made a Junior Minister (Minister for the Arts, Heritage & Tourism) at the Department of Culture Media and Sport – well done John.

UPDATE: Sept 2018  Having been promoted in Jan 2018 to  Economic Secretary to the Treasury and City Minister, John Glen has now blotted his copybook somewhat by accidentally revealing a Treasury no-deal Brexit document ‘Operation Yellowhammer’. 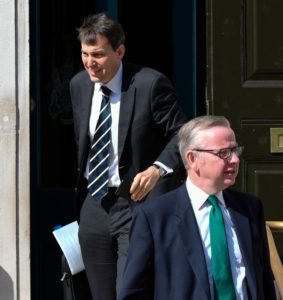 Time spent with your dog is never wasted