Recently I saw a tweet (pasted below) from Kate Andrews of the right-wing lobby group ‘The  Institute of Economic Affairs’ (IEA) and thought it was disingenuous for two reasons:
1. The IEA has, for some time, been using comparisons between the NHS and other European health care systems to undermine the NHS and yet most European systems will be almost as unacceptable to a right-wing libertarian organisation like IEA as the NHS. I assume the tactic is to undermine the NHS initially and then ditch any pretence of promoting other forms of universal health care in favour of a neoliberal ‘utopia’ where everyone is able to access the care they need from private providers using private insurance.

In my reply, I try to address these issues. 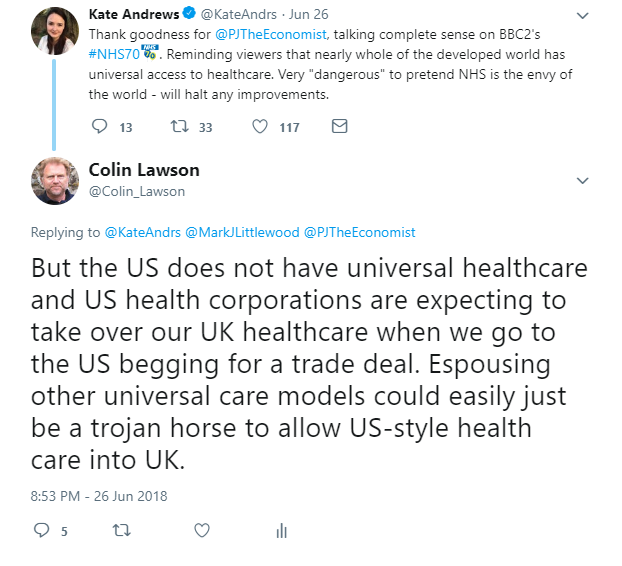 In reply Mark Littlewood, (Director General of the IEA) posted the message below:

Before I had a chance to reply he posted his final message, below and then blocked me.

If I had been given the chance to reply I might have mentioned that:

UPDATE: Slowly but surely the murky world of dark money and phoney think tanks is being exposed:

The Brexit-influencing game: how IEA got involved with a US rancher: https://www.theguardian.com/politics/2018/jul/30/brexit-influencing-game-iea-us-rancher-tucker-link?CMP=Share_AndroidApp_Tweet

Head of the IEA Mark Littlewood: “Our advertising value equivalent on the media last calendar year was £66m.” And most of that was probably on the BBC.

Leading Brexiteers are on record as wanting to dismantle the NHS:

Liam Fox says people warning NHS will be sold off in Brexit trade deal with Trump are ‘anti-trade’: http://uk.businessinsider.com/liam-fox-international-trade-secretary-interview-nhs-trade-deal-brexit-trump-no-deal-2018-7