“Brexit: the battle for democracy starts here” is the title of an ‘Institute of Ideas’ and Spiked on line, event with apparently just three speakers, all Spiked members, Frank Furedi, Claire Fox and Tom Slater.

I was attracted by the title but appalled by the briefing notes for the meeting: 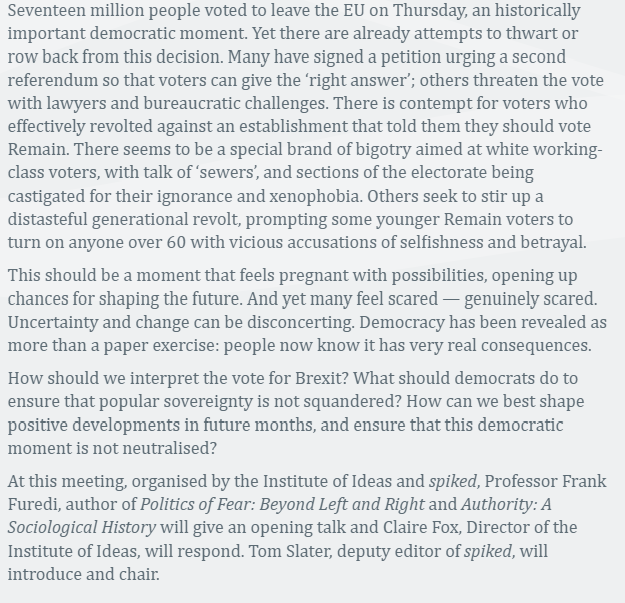 Throughout the notes the author does exactly what he/she accuses the opposing camp of doing, i.e. showing contempt for the opposing view by taking individual examples of outrageous slurs and then attributing them to everyone in the opposing camp.  The author has made unfounded assertions, and cherry picked the evidence, and/or distorted it to fit a narrative.

This did not bode well for the meeting especially when the only speakers appear to be members of the right wing, neo-libertarian ‘Spiked’ online magazine. Surely effective planning to engage in a battle for democracy needs input from, and be open to, a wide range of opinions and views.

I voted to remain. I thought about the issues carefully and tried very hard to be objective and reasoned. I appreciate that others came to different conclusions and I admit that my vote was for what I considered the least worst of a binary choice which did not allow me to express my actual preference. However it was made in good faith. To be smeared and denigrated by the Spiked speakers because I did not make the same choice as them is not the best way to involve me in an open debate on the way forward.

I did not attend the meeting so cannot judge what actually happened but I can only say that the closed minded tone of the briefing notes would have put me off attending even if I didn’t happen to live 300 miles away.

Out of interest I listened to IoI’s latest podcast “Podcast of Ideas: post-referendum special”. Three Spiked members spend 30 minutes on a partisan, narrow minded rant about those who voted to remain.  With no other guests there was no one to call them out on their litany of straw man arguments, unfounded assertions and cherry picked examples.  A waste of 30 minutes and not an encouragement for me to engage further.

Here’s the link (Podcast of Ideas: post-referendum special”) – check for your self:  http://instituteofideas.com/comment/podcast_of_ideas_post_referendum_special#.V3pwYLgrLIU

UPDATE (03/07/2016).  OK I have now listened to all bar the last 30 minutes of the two hour “Brexit: the battle for democracy starts here” (Link: http://www.instituteofideas.com/comment#.V3pwgrgrLIV).

Early on, one of the speakers, Frank Ferudi, I think, said that the meeting was not a Brexit rally. But in reality as far as the speakers were concerned this was pretty much what it turned out to be. There were a few good questions from the audience and Frank Furudi indulged in a bizarre and meandering discussion about identity. However the over riding impression was that Ferudi and particularly Clarie Fox, spent a significant amount of their time slagging off those who had voted remain using stereotypes and caricatures – exactly what they accused the remainers of doing.  There was a forceful but unsubstantiated defence of the referendum process without any analysis or even mention of the aspects of the process that concerned those who regard the referendum as a travesty of democracy.

What stood out for me about the input of Ferudi and Fox was the total absence of any discussion about how our democracy might be developed post Brexit and how we should “fight the battle for democracy”. This was the title of the meeting but was absent from the speakers input apart from a plea that we should make sure that Brexit actually happens.  No discussion of the future of democracy or the mechanics of how we make our political system more democratic.

The title of the meeting attracted my attention. I wanted to hear from Claire Fox and Frank Ferudi  how we might ‘fight the battle for democracy’?  I was badly disappointed. In reality the meeting was simply a Brexit Rally aimed at motivating the faithful.

If the Spiked On Line speakers want to recruit non zealots to their ‘Invoke Article 50 Now’ campaign they could start by at least trying to substantiate their assertions about brexit and democracy.  “Carrying out the will of the people” and “the people have spoken” are words taken from the vocabularies of demagogues, not democrats and result in the tyranny of the majority. History gives us ample evidence that this is not a wise system of government.

The lack of any substantive discussion about how democracy after brexit involves anything more than a transfer of control to a more right-wing branch of the Tory party, plus increased influence by right-wing plutocrats like Arron Banks does not convince. Our current flawed and limited democracy is subverted by neo libertarian politicians, demagogues and corporate power, the Spiked speakers have not offered any plan for preventing this process from accelerating after brexit.

Oh and finally just a reminder – democracy does include the right to dissent, including immediately after an election or referendum.

Just gonna use this now, every time someone says “you lost, pipe down, stick your dummy back in”https://t.co/MgM8PcA5A6

4 thoughts on “Brexit: the battle for democracy starts here. (Institute of Ideas / Spiked on Line)”