Do you want “Long Term Economic Plan” or do you want the Truth? Here’s the Truth!:  Quarterly growth was 1% when George Osborne took over from Labour. Today, over five years later, it’s just 0.5%.

It’s tiresome to have to keep pointing out that the financial crash of 2007/8 and the resulting UK debt mountain were not caused by ‘immigrants’ or ‘welfare scroungers’ or ‘health tourists’ or ‘Polish plumbers’ or the disabled and they weren’t even caused by the Labour Party.

We have short memories if we fail to remember that the crisis (which had its foundation in the deregulation of banking and financial services in the 1980s) was caused by greed and incompetence in the banking industry. It culminated in the US where banks had lent colossal sums of money in worthless, sub prime loans and then repackaged those loans and sold them on to the rest of the global finance industry disguised as respectable investments. This was legalised fraud on a massive scale.

The crisis was duplicated in the UK where Northern Rock, another bank up to its eyes in sub-prime mortgages, suffered the first run on a British Bank in over 150 years. It soon became clear that a number of our banks were on the verge of collapse and had to be bailed out by the tax payer. The resulting recession meant that tax receipts dropped, welfare payments increased and the deficit went through the roof as the economy was hit for six.

Let’s also remember that by 2010, under Labour, we were in recovery and that it was George Osborne’s misguided reliance on austerity (2010 -2013) that stifled the recovery, left us teetering on the verge of  recession and lost us our triple A credit rating.  All countries eventually recover from recession, only the Tories could try to take credit for two wasted years and the longest UK recovery in over 150 years.

It is  annoying but hardly surprising that regardless of how much evidence you produce it is impossible to shift the minds of those who live in that alternative universe created by the Daily Mail and the Tory spin machine.

However it is particularly galling that during the General Election, and even, during the party leadership campaign, little effort was made by Labour party leaders to counter the barrage of lies and false statistics from the Tories and their friends in the media.

What happened to the bankers who led us into this mess? Northern Rock, once a respectable building society, was demutualised in the 1990s.  Under the leadership of Matt Ridley, Northern Rock developed a business model that involved borrowing heavily, selling large quantities of sub-prime mortgages and then reselling them on the international markets. When the market for those ‘securitised loans’ collapsed, Northern Rock was insolvent, there was a run on the bank and Matt Ridley had to go cap in hand to the UK government for a bail out.

Where is Matt Ridley now?  Is he hiding penniless and in shame some where? Oh you needn’t have worried, a group of Tory hereditary peers elected him into the Lords.  He can now live quite well on £300 a day attendance allowance courtesy of the tax payer. That will go nicely with the income he gets from the opencast coal mine on his estate in Northumberland while he acts as Tory party climate change adviser.

And before you ask – yes – Viscount Matt Ridley voted in favour of tax credit cuts for millions of low paid hard-working families.

The charts below show how the financial crisis and UK Debt were not caused by excessive borrowing or spending prior to 2007 (source: UK Office for National Statistics). 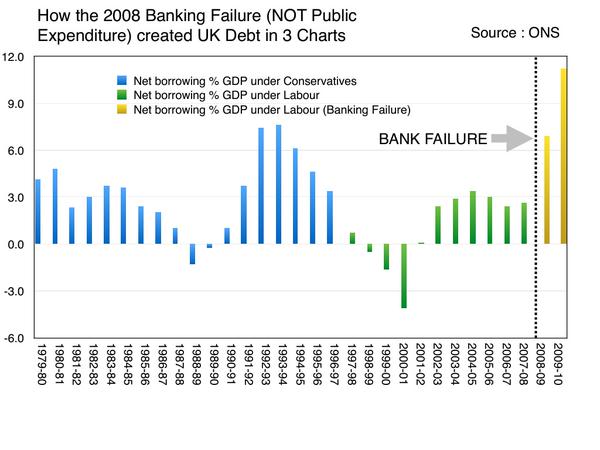 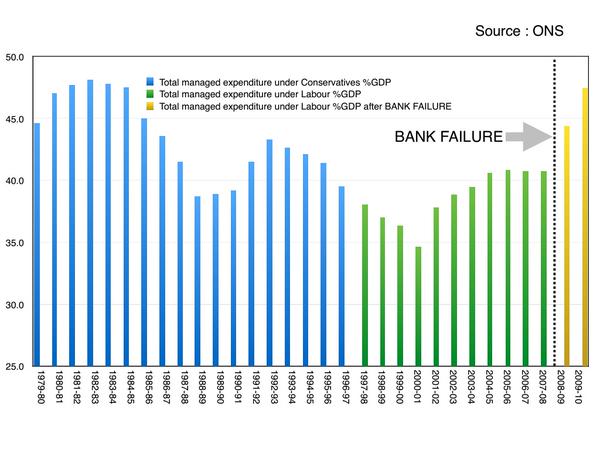 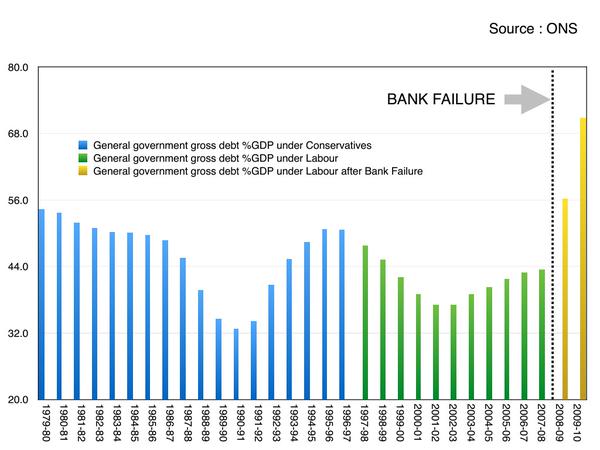 Here’s what the last governor of the Bank of England thinks – ‘Labour not responsible for crash’, says former Bank of England governor: http://www.theguardian.com/business/2014/dec/29/labour-government-not-responsible-crash-bank-england-governor-mervyn-king

Office for Budget Responsibility chief  rebukes Osborne: the UK was never at risk of bankruptcy:  http://www.newstatesman.com/politics/2012/12/obr-head-rebukes-osborne-uk-was-never-risk-bankruptcy

Here’s a summary of the Reality: The last government did not borrow excessively and it was the banking crisis that caused the recession.
http://www.neweconomics.org/blog/entry/mythbusters-excessive-government-borrowing-got-us-into-this-mess

Here’s the full anaylsis – “Did excessive government borrowing got us into this mess” Charlie Cooper and Simon Wren-Lewis: http://dnwssx4l7gl7s.cloudfront.net/nefoundation/default/page/-/publications/Excessive%20borrowing%20got%20us%20into%20this%20mess.pdf

Labour is being far too reticent: it didn’t cause the global financial crisis and Coalition austerity policies have stalled the recovery: http://www.independent.co.uk/news/business/comment/david-blanchflower/david-blanchflower-labour-is-being-far-too-reticent-it-didnt-cause-the-global-financial-crisis-and-coalition-austerity-policies-have-stalled-the-recovery-10158888.html

“It’s so simple to be wise. Just think of something stupid to say and then don’t say it.”