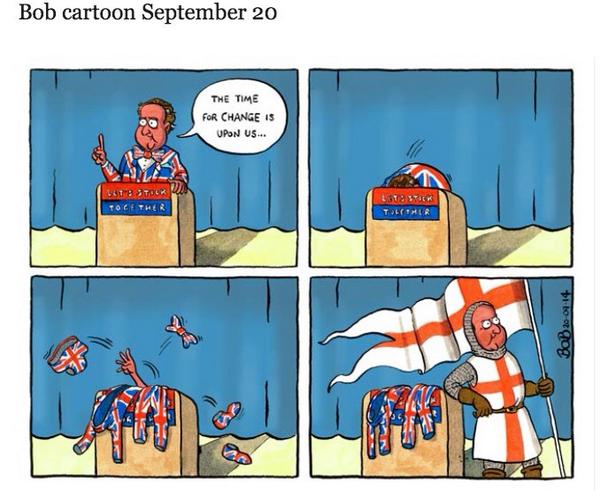 The relief south of the border after Scotland’s NO vote was palpable, but no sooner we begin to relax than small minded little Englanders and political opportunists are undermining reconciliation and constitutional reform. Just when we need some real Statesmen to put the interests of the UK above short term political gain we find that the same politicians that got us into this mess are rooting to do more of the same.

David Cameron’s very first speech after the independence referendum demonstrates that, confronted with a major constitutional crisis, he intends to play a divisive, narrow, party political game with little concern for unifying the nation.

It is clear that any new constitutional arrangement needs to be fair to the countries of the UK. It is also clear that the Westminster establishment totally cocked up its response to the independence referendum with last minute panic and promises, leaving them with a multitude of problems. However the excessive use of rhetoric that plays to English nationalism in an attempt to turn the shambles into a short term political advantage is clearly playing with fire.

It is pretty clear that Nationalism has the potential to become very ugly.  And we already know that you

cannot out ukip UKIP so please let’s not try.

It is essential that we tone down the nationalist and xenophobic rhetoric from all sides.

Before the referendum there was no shortage of encouragement from the English to be first and foremost British.

The Scots have reasserted their Britishness, time for England to do the same.

On the day after the referendum result I suspect there are many NO voters already regretting their decision.

UPDATE:  Looks like anger is beginning to develop among both yes and no voters – if Cameron and the likes of discredited former ministers Liam Fox and Owen Paterson, plus the Tory media, continue to use jingoistic rhetoric for short term political gain they will only inflame the situation – with predictable consequences.

Note re devolved government in England: Given that public services are being out sourced to private companies like G4S, Serco, Atos etc., there will soon be no need for devolved government in England. We have already given up sovereignty over our utilities to foreign companies.  Energy –  France and Germany, Docks – China, Water – China, Singapore, Hong Kong, Australia etc., etc.    Our schools are being taken over by business men and religious zealots, exempt from all local accountability.   The running of the NHS is being taken over by a combination of accountancy, firms, management consultants and US private health care companies.  Those of us who care if our nuclear power stations are run by the Chinese through stupendously expensive contracts that will be legally and irrevocably binding on all future UK governments might need to ponder whether or not Scottish MPs voting on English law is the most urgent threat to our national sovereignty.

Depressing to see Mail on Sunday (21st Sept 2014) still mired in the same old xenophobic tripe (unfortunately the enthusiasm for thoughtful debate displayed by the Scots did not rub off on the Mail and its readers):

Once I thought I was indecisive, but now I’m not so sure …