Democracy is  dependent upon an electorate that is accurately informed.

Unfortunately, UK government ministers and the right-wing press have made sure that we are misinformed about (almost) everything – here is the result. The chart is the result of an Ipsos.MORI poll examining the difference between peoples’ perceptions (mean estimates) and reality (actual) when asked questions about the UK population. 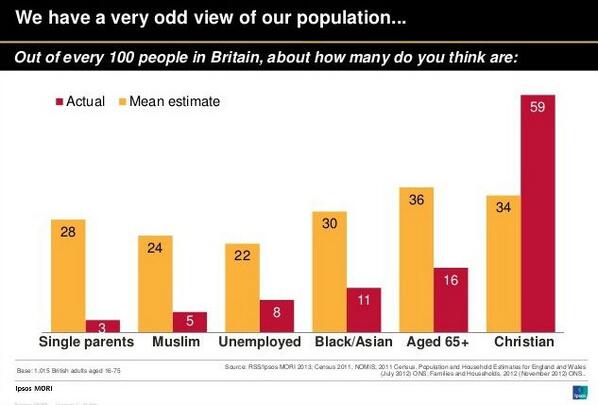 Here is another example from the Ipsos.MORI poll (referenced below):

Here is the reality

“With the lowest numbers recorded since 1969, the teenage pregnancy rate is proof of all the hard work of sexual health and education professionals, and the lasting legacy of the decade-long Teenage Pregnancy Strategy.
Read more at http://www.fpa.org.uk/news/teen-pregnancy-rates-continue-fall-england-and-wales#1CdvzfTmfHPWh1cR.99

Was this news on the front page of the Daily Mail.  Of course not – it did not fit their alternative reality.  It would only be on their front page if they could somehow twist the data into a moral outrage about increasing teenage pregnancy.  Even the Mail has failed to manage this – so far.

More from the IpsosMORI poll:

Foreign aid: 26% of people think foreign aid is one of the top 2-3 items government spends most money on, when it actually made up 1.1% of expenditure (£7.9bn) in the 2011/12 financial year. More people select this as a top item of expenditure than pensions (which cost nearly ten times as much, £74bn) and education in the UK (£51.5bn).

These two pieces of research indicate the gap between perception and reality in the British public:

The IpsosMORI Poll – Perceptions are not reality: http://www.ipsos-mori.com/researchpublications/researcharchive/3188/Perceptions-are-not-reality.aspx

“Watching Only Fox News Makes You Less Informed Than Watching No News At All” http://www.businessinsider.com/study-watching-fox-news-makes-you-less-informed-than-watching-no-news-at-all-2012-5#ixzz2o2UEgHzE

These are just a few examples of government ministers misinforming the public:

Ministers who misuse statistics to mislead voters must pay the price.   http://www.theguardian.com/commentisfree/2013/may/31/ministers-misuse-statistics-resign

This gives just a few recent examples of tabloid misinformation:

The Daily Mail & The Sun continue to undermine their own case for press freedom: http://www.reasonandreality.org/?p=2837

Some Questions for our local MP John Glen: http://www.reasonandreality.org/?p=1789

As usual, please let me know if there are any errors in the text above so that I can make corrections.

My mind’s made up – don’t confuse me with the facts.