The Daily Mail and The Sun claim to be keen supporters of freedom of the press but everyday their dishonesty, hypocrisy and total lack of any ethical standards fatally undermines their own position.

On October 21 The Sun had screaming headlines:  “Brussels: UK’s 600,000 benefit tourists is no problem”.

The aim of the article was a double whammy – to have a go at the demon EU and also fan the flames of xenophobia with a scare story about benefit tourists.  Only none of this story was true.  But of course this did not matter.  As Winston Churchill, and others, have said “a lie will be halfway around the world before the truth has got its shoes on”   Worse,  evidence suggests that once people have accepted a ‘fact’ it is very difficult to then persuade them that it was a lie.  The lie retains an existence where as the correction is ignored, particularly when it is tucked away on an inside page in small print – see below: 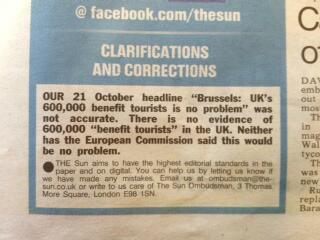 Less than a week later The Daily Mail had another screaming headline claiming that Gordon Brown claimed £316,000 in salary expenses in the last three and a half years.  Here is the correction – no headline and tucked away where no one will see it.  The lie will be accepted as truth by Daily Mail readers. 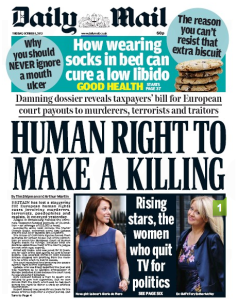 This Daily Mail front page appeared on the 7th Oct 2013 and, like most tabloid articles about human rights, it tells outright lies in order to deceive and deliberately misinform.

Below is the correction, which was a small paragraph with no headline, tucked away on an inner page, over a month after the original article.  Please see the Adam Wagner article below for the full details of this outrageously dishonest article – part of an on going and deliberate campaign to undermine the public’s understanding of human rights.

I should mention that the “criminals” making a killing from the European Court of Human Rights included:   Mr McElduff and his fellow applicants (in Tinnelly and Sons and Others and McElduff and Others v. the UK) were self-employed joiners who were blacklisted from public works contracts because they were catholics, A. (in A v. the UK) was a 12 year old boy who was assaulted by his step father, the Osman family (in Osman v. the UK) the widow and son of man murdered by a stalker and David and Carol Glass (in Glass v. the UK) a disabled child and his mother.

UPDATE 18th Jan 2014:   Not a day goes by without more examples of the blatant  and deliberate dishonesty of certain newspapers but I just thought I would add this one from the Daily Mail on the non existent invasion of Romanians and Bulgarians : 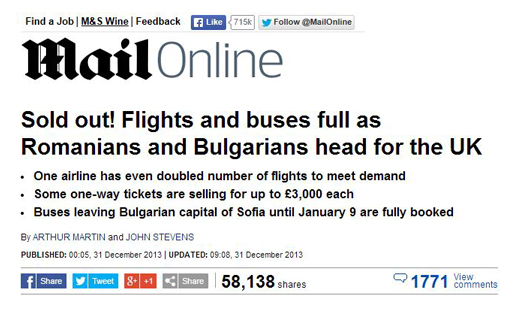 Check this link for a good response:  http://eu-rope.ideasoneurope.eu/2014/01/16/daily-mail-trick-or-truth-you-decide/

and here is a response from a Romanian student via an article in the Financial Times:

Leveson, Global Warming and the Lies of James Delingpole and the Daily Mail

Everything we call real is made of things that cannot be regarded as real.