Is this where we are in the life cycle of the housing bubble??: 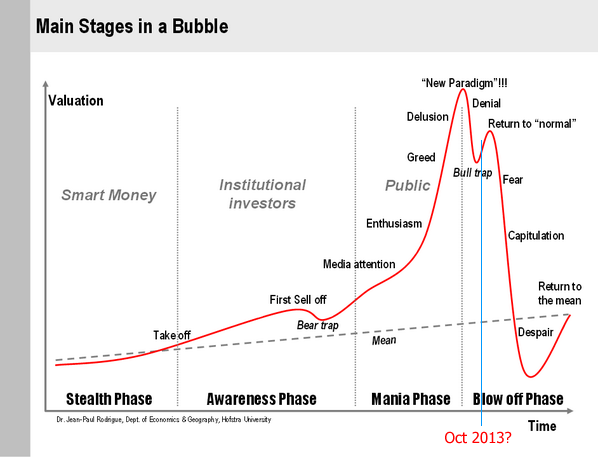 A major and seemingly accurate criticism of ‘New Labour’ was that their economic “success” up to the time of the financial crisis of 2007 was dependent on a house price and private debt boom.  The Tories have made much of this although they were pretty quiet at the time.

When the Tories came to power they made a big deal about getting the public debt (caused by the financial crisis) down and how dangerous a debt fuelled expansion would be.  The subsequent cuts in government spending and public sector lay-offs resulted in it taking us longer to ‘recover’ from the crisis than it took to fight the second world war.   Most of us based in the real world wondered why it wasn’t possible to use loans (with an effective interest rate of zero) to kick start the economy by building or improving infrastructure and building homes. This would have immediately increased employment, increased tax income, decreased welfare benefits and hence reduced the debt at a faster rate as well as start to tackle the housing crisis. (The reality is that debt has in fact gone up under the Tories)

Strangely and suddenly (less than two years before the next election) we now have “Help to Buy”, a debt fuelled policy that will stimulate demand for non existent houses – there are two possible outcomes, either the policy will fail to help first time buyers (perhaps they will be too worried about taking on 95% mortgages for houses that they know they cannot really afford) or we will see house price inflation and another bubble, i.e. a debt fuelled expansion. It may only be in London and the south but what happens when the bubble bursts.  The banks and this time directly the tax payer will be landed with another batch of worthless sub-prime mortgages. Except this time when the unreformed, still too big to fail, banking sector comes to the tax payer for bailing out, the kitty will be empty and the  consequences are likely to be catastrophic.

What “Help to Buy” means:

As it is quite possible that I am the only person who reads this blog I have not bothered to provide references for the above points, but believe that I can do so if required.  Just use the reply box below to ask (click the comments link at the top right if the box is not visible). Please let me know if you disagree with my logic or any of the data.

One thought on “Help To Buy – the next big scandal / disaster??”

“I beseech you, in the bowels of Christ: Think it possible you may be mistaken.”