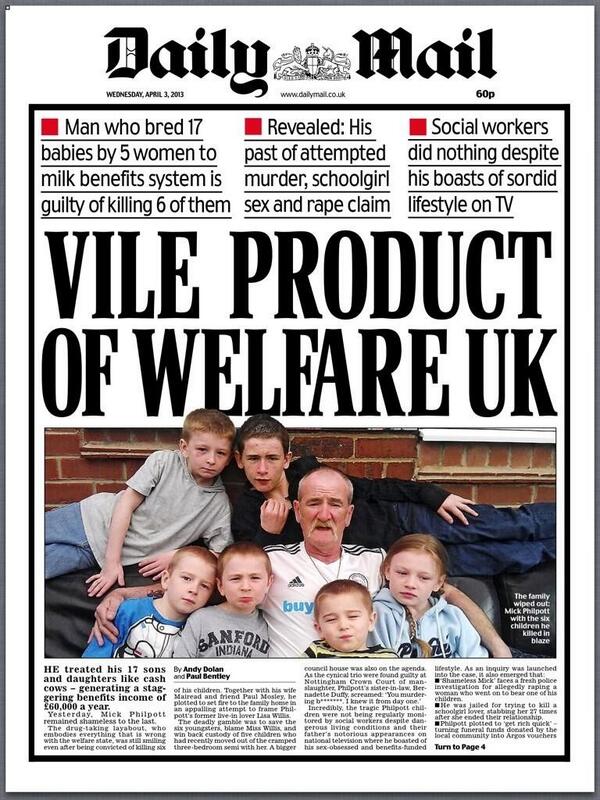 A message to the Daily Mail:

We like our country. If you hate it so much why don’t you push off to wherever you came from and take all your hate with you.

Just in case any Daily Mail readers pop in here (unlikely) and don’t ‘get it’. I had better explain.  The story depicted on the front page is tragic, terrible, disgusting beyond description but it is contemptible and utterly cynical to use this to promote the continuing rightwing campaign of hate filled lies and disinformation aimed at smearing and dehumanising welfare recipients, the disabled,  immigrants, and our welfare system.   This story is a one off and obviously has no more relevance to questions of welfare than the murders of Dr Shipman had to the health sevice or the ‘murderer’ Lord Lucan had to the British aristocracy.

In his twenties Philpott nearly killed two women in a frenzied knife attack.  He was not on benefits – he was in the army. Was the army to blame??   The real issue here is how we as a society allowed this man to abuse women for so long, even fueling him with prurient media attention. Had the abuse been dealt with, the children would probably still be alive. If there is any message from this horrible affair it is the fact that two women are killed each week by their partner or ex partner and we just let it carry on happening.

The other message is that there is something seriously wrong with the psychology of wealthy men, like Osborne and Cameron, who were lucky enough to be born millionaires and who have never had a proper job but find it necessary to use the Philpott story to supplement their campaign of vilification and smear against those less fortunate than themselves. A campaign that clearly aims to demonise and stir up hatred for political gain rather than approach the real issues and problems through a rational, reasoned, evidence based debate.

The reality is that the British are ‘mostly’ a tolerant and compassionate bunch who want a welfare service that is available to those who need it (an insurance policy for us all). But they are aware that previous governments of both parties have taken their eye off the ball. It was during Thatcher’s government that large swathes of traditional industry were decimated leaving communities throughout the country with literally no jobs and consequently self respect and morale were destroyed for generations. It was under her government that large numbers of unemployed were cynically transferred to invalidity benefit to ‘hide’ the atrocious unemployment figures. It was Labour who had thirteen years and a ‘booming’ economy to put things right and although some progress was made it was disappointing compared to the size of the problem. So both parties left us with a mess – poor, demoralised communities forced against their will into dependence on the welfare state. This was a government generated problem.  Cherry picking isolated, extreme examples that fit a distorted world view just demonstrates a cynical disregard for honest debate.

We need to protect benefits against cheats and thieves. But freak cases tell us nothing about what is happening to the majority of benefit claiments – those working long hours to make ends meet because they are paid less than a living wage.

Don’t get mad about the Mail’s use of the Philpotts to tarnish the poor – get even  Zoe Williams, The Guardian, Wednesday 3 April 2013

Stephen Seddon murdered his parents for their money, does this mean we need to Reform Inheritance tax?   New Statesman, 3 April 2013

False association / illusory correlation: a technique used frequently by Daily Mail: e.g. Always start any article on welfare with a rare and extreme example of abuse of the system with aim of subliminally (and falsely) smearing and vilifying all welfare recipients.

“If voting changed anything, they’d make it illegal.”